Definitely one of the more aptly named neighborhoods in Chicago, Gold Coast has been a posh destination since the neighborhood first arose from the ashes of the Great Chicago Fire in the 1870s.  Initially home to many of Chicago’s wealthiest families, the Gold Coast has developed into a residential oasis near amenities both man-made and natural.

The borders of Gold Coast are:  North Avenue to the north, Chicago Avenue to the south, Clark Street to the west, Lake Michigan to the east.

Gold Coast residents have easy access to both Oak Street and North Avenue beaches, two of the most popular (and crowded) beaches in the city.  And the green expanse of Lincoln Park abuts the neighborhood to the north, offering plenty of space for both relaxation and recreation.

Architecturally, the neighborhood boasts tree-lined streets and some of the most beautiful examples of Victorian architecture in the city, alongside high-rise and mid-size apartment and condo buildings both old and new.

For shopping and entertainment, it would be tough to top Gold Coast. The Magnificent Mile along Michigan Avenue is just to the East, and in the neighborhood proper, Oak Street is lined with upscale boutiques and restaurants. In the middle of the neighborhood, Rush Street offers numerous options for dining and people-watching, particularly in the area popularly known as the “Viagra Triangle,” bounded by State, Rush and Bellevue streets.

Culturally, Gold Coast is also well-situated. It’s within walking distance to the Museum of Contemporary Art, the Chicago History Museum and the Peggy Notebaert Nature Museum, and the Art Institute and Loop Theater District are a quick El-ride away.

While it may not be a particularly “hot” neighborhood, Gold Coast doesn’t really need to be. It retains much of the cache it was born with and given its proximity to the lake and the city center, it remains a great place to live.

While many of the exclusive – and beautiful — residences built in the early 1900s remain, developers throughout the 20th Century added numerous high-rises of varying quality. While these buildings offer more affordable housing options, buyers should be aware of some of the drawbacks of early high-rise living, including non-adjustable heat and air conditioning, slow elevator service, and occasionally expensive special assessments. 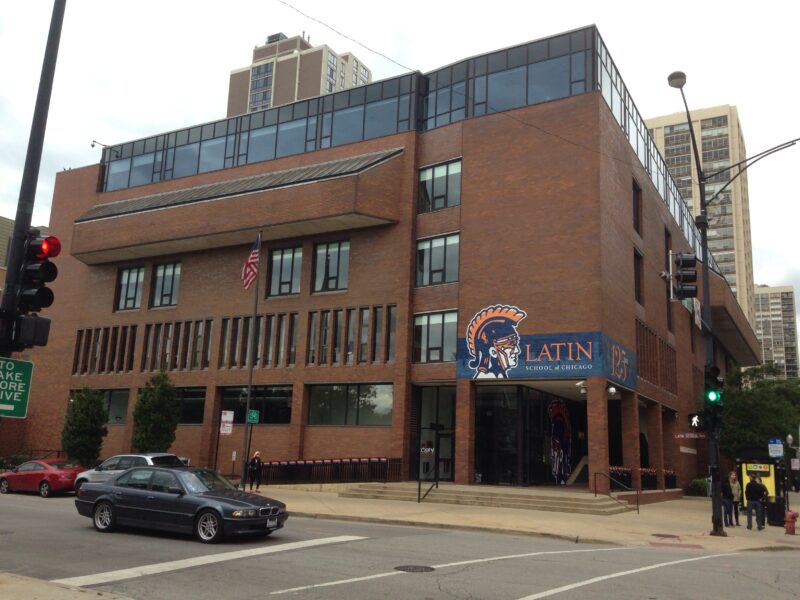 Latin School of Chicago One of the most exclusive (and expensive) schools in Chicago, Latin School provides a liberal arts education from kindergarten through high school for well-heeled Gold Coast families.

Le Colonial:  After more than 20 years on Rush Street, the Gold Coast standby moved around the corner to Oak Street but didn’t miss a beat. With upscale Vietnamese French fusion cuisine and a great balcony overlooking Oak, Le Colonial remains a great date spot and one of the best “see-and-be-seen” restaurants in the city.

LuxBar:  For a more relaxed eating environment, head to this bustling tavern, where burgers and fried chicken rule the menu.  While still stylish – it’s the Gold Coast, after all – LuxBar dials back the pretension and offers great food at more reasonable prices. 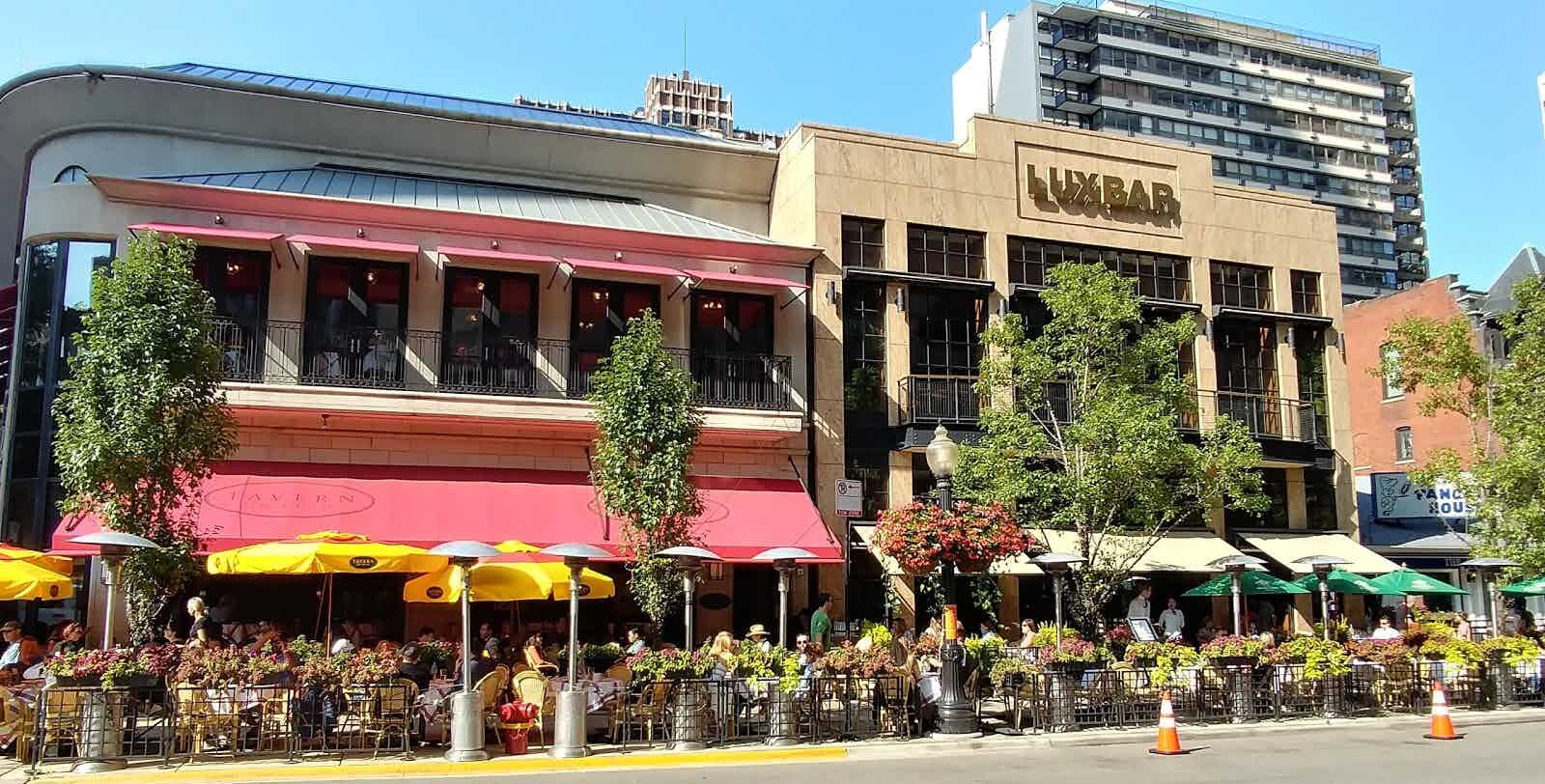 Dublin’s:  A classic Chicago Irish pub, Dublin’s offers a fun, low-key atmosphere, a great sidewalk patio and hearty Irish pub food. Their corned beef is stellar, whether served with cabbage or piled high on their Reuben.

Tavern on Rush:  Upscale but still casual enough, this classic Chicago steakhouse offers a great patio and classic steakhouse fare. Whether you splurge on a seafood tower or keep it low-key with a rib-eye, the lively atmosphere and great people-watching make it a worthwhile stop. 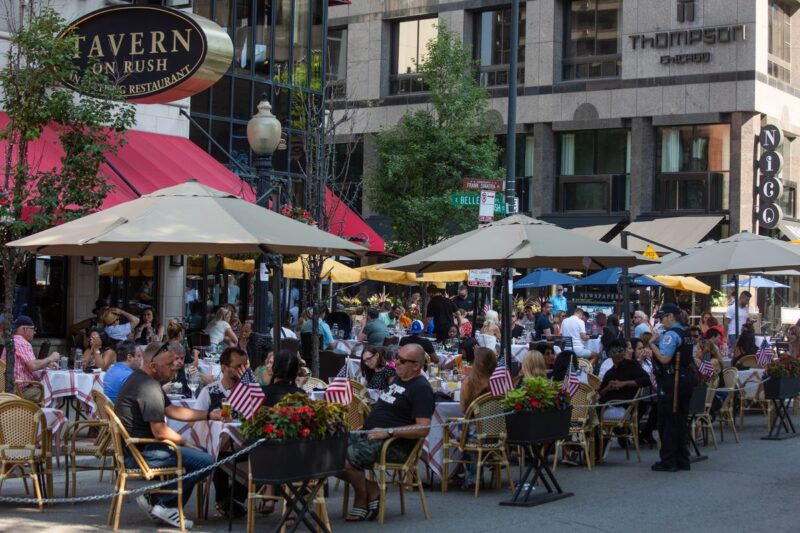 Michigan Avenue/Oak Street:  While I’ll highlight a few shops in this section, just wanted to note that literally everything is walkable from Gold Coast.  Michigan Avenue’s Magnificent Mile is one of the nation’s premier shopping districts, while Oak Street offer a more exclusive, boutique selection of retailers and designers.

Restoration Hardware:  Located in the landmark Three Arts Club building, this Restoration Hardware location is not your typical furniture store. In addition to furniture, RH includes a fantastic (and gorgeous) restaurant in an interior atrium, a coffee shop and design services.

Bravco:  Nestled in among the pricey Oak Street boutiques is this little beauty supply shop, featuring brands not normally seen outside of salons at discount prices.

Morgenthal Frederics:  Unique eyewear for the discriminating (if nearsighted) Gold Coaster. You’ll be treated like four-eyed royalty at this optical boutique, with frames far beyond Lenscrafters, in both design and price.

Gold Coast residents are well-served by public transportation.  The neighborhood is bordered by two Red Line el stops at Chicago and State and at Clark and Division. In addition, bus lines run along Lake Shore Drive, Michigan Avenue and Clark Streets, offering quick access to the Loop. For drivers, most major highways are accessible via Lake Shore Drive, or more directly about a mile west of the neighborhood.  96 | 90 | 86

With easy access to the Loop, the lake, expansive parkland, and some of the most beautiful classic architecture in Chicago, Gold Coast more than lives up to its name. While much of it is pricey, relative bargains can sometimes be found in some of the larger condo buildings in the neighborhood, but caution should be taken – not all of those buildings are the bargains they may seem. It pays to work with realtors who know the neighborhood, so If you’re interested in living in the Gold Coast, be sure to Ask Nagel!